Sivasagar/Sibsagar, formerly known as Rangpur, was the capital of the Ahom Kingdom from 1699 to 1788. The Ahom ruled Assam, virtually without interruption for 6 centuries, until their kingdom fell to the Burmese in 1819 and their ruling class was all but wiped out. The province was liberated by the British in 1825 but, owing to the state of anarchy which prevailed, it was completely annexed in 1826.

Shiva Dole is one of the tallest Shiva temple in the world. The word 'Dole' means temple in Assamese. It was built by Queen Ambika, wife of King Shiva Singha, in the year 1734. Shiva Dole is 180 feet tall and 195 feet in diameter. It is caped seven feet high large Golden Dome, called 'Kolosi', on the topmost part of the dole. The walls of the temple are sculptured with statues of numerous Hindu Gods and Goddesses. Maha Shivaratri is the most celebrated puja of this temple. Thousands & thousands of devotees come to the temple in the Shivaratri from various place of Assam.

Vishnu Dole is a temple of great architectural importance and is located just adjacent to the Shiva Dole. It was built by Queen Ambika, wife of King Shiva Singha, in the year 1734. The temple is dedicated to the worship of Lord Vishnu and can be visited all round the year. However, the month of Bhada is very special for this temple according to Hindu calendar. Daily kirtans and prayers are held in the temple all throughout the month and devotees from far and wide come to get a glimpse of the Lord.

Devi Dole is situated close to the Shiva Dol and Vishnu Dol and symbolizes the Hindu Goddess of Power, Durga. For the last three centuries, the temple has been an epitome of Shakti Puja in the state and people from different parts come to offer their prayers to the Goddess. The most important festival in the temple is Durga Puja, which is celebrated twice a year, one in the month of Chaitra (April-May) and then in the month of Ashwin (September-October).

Sibsagar Lake or Sibsagar Tank is an artificial lake which was built by Queen Ambika, wife of King Shiva Singha, in the year 1734. Sibsagar town was named after this lake which is situated at the center of the town. Sibsagar Lake, which covers an area of about 130 acres, lies at an altitude of about 40 m and it is surrounded by deep earthen moats.
There are parks, gardens, museum, masjid, Buddhist monastery, church and temples on the banks of Sibsagar Lake.

Joy Dole was built during the reign of the renowned Ahom king, Rudra Singha, there is a set of three temples, located on the northern bank of the Joysagar tank, about five km from the township of Sibsagar. The most famous among these temples is the Joy Dole, also known as the Kesavanarayan Vishnu dole. As the name suggests, the temple is devoted to Lord Vishnu and his many incarnations.
Joysagar Tank was built by the Ahom King Rudra Singha, in the memory of his mother Joymoti, in the year 1697. The entire tank was constructed in just 45 days in the Rangpur region, which is about 5 km away from Sibsagar town. It covers a total area of 318 acres and on its bank lie four important temples of Assam, namely Vishnu temple, Devi Ghar, Shiva Temple and Ghanashyam Temple.

Rang Ghar is one of the major attractions of the state of Assam. It is said to be the oldest amphitheatre in the whole of Asia and has often been referred to as the 'Colosseum of the East'. Situated to the northeast of the Tolatol Ghar, in the Joysagar area of the Sibsagar district; is the two storied Rang Ghar, which was the royal venue for witnessing a number of games.

Tatatal Ghar was built by Rajeswara Singha (AD 1751-1769). Except an octagonal small temple, guard room, three large chambers and a big hall with courtyard having separate entrance, the entire area on this floor is left open. Presence of numerous post holes on the terrace indicate the practice of erecting temporary shades occasionally to cater the needs of ceremonial gatherings. All the rooms were connected with small passages. Talatal ghar had three storeys underground and four storey’s above ground.  Though top levels of the palace having wooden works are completely destroyed and  the underground levels are currently closed for tourists.

Kareng Ghar is the remains of royal palace of Ahom kings when Garhgaon was their kingdom's capital. Kareng Ghar was built by king Rajeswar Singha in 1752 AD. The fort and the royal complex were badly damaged and disfigured. The structural remains in the fortified complex stand as a mute testimony of the Ahom kings of the bygone days. The monument is four- storied building and arranged in gradually receding tiers. There believed to be a secret underground tunnel from Kareng Ghar to 'Talatal Ghar' in Rangpur which is many kilometers away from this and across the Dikhow river.

This dargah was built in the memory of the great Muslim reformer and saint, Hazrat Shah Milan, also known as Ajan Pir. It is a very famous tourist destination in Assam and revered by both the Muslims and the Hindus. The dargah is situated in the Saraguri Chapori region, which is about 22 km from the town of Sibsagar. Every year, on the occasion of URS, thousands of devotees come here to honor the great reformer.

Amazed and awestruck, this is the reaction of the most of the people while looking at the 42 tombs of the Ahom kings and queens, in the Charaideo hillocks of Assam. The excellent architectural skills and craftsmanship of the masons and architects of medieval Assam are revealed in the numerous pillars and burial sites of this historical place.

Gaurisagar Tank is a major tourist destination in Assam, located at a distance of about 12 km from the center of Sibsagar town. Built about 200 years ago, the tanks as well as the three temples built on its bank are dedicated to the goddess of power - Goddess Durga and her many forms. This eighteenth century tank, along with its three temples, was constructed by the erstwhile queen of Ahom Kingdom, Rani Phuleswari Devi. 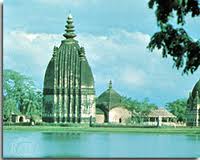 Rudrasagar Tank was built in the year 1773, by the Ahom king Lakshmi Singha and was dedicated to his father king Rudra Singha. Located on its banks, at a distance of eight km from Shivsagar town, is a huge temple devoted to the worship of Lord Shiva. Besides the temples and forts mentioned above, a number of Vaishnava Satras, Muslim Dargahs, Buddhist and Sakta shrines are also found here, constructed by the Ahom, Manipuri, Jaintia and Shah rulers.

The Namdang Stone Bridge(Xilor Xaaku) is 60 meter in length, 6 meters in width and 1.7 meters in height. King Rudra Singha called the architect of the bridge from Cooch Behar. Historian Edward Gait mentioned the architect as Ghanashyamuddin. It is not still clear why was he called, because there is no proof of similar in the Cooch Behar region. The bridge is little curved in shape, so that the load distributes to the edges of the bridge, a arch bridge design. This increases the load capacity of the bridge many times. The stone for the bridge were quaried from near by Naga hills, a place called Silakuti (Xilakuti). The floor of the bridge is made of just single rock nicely and perfectly curved. Archs are built from slabs of rocks joined with stone nails and masonary. The mortar for the masonary work was made of Bora rice, Duck eggs, Rice chaff, lime and Black lentil.

The museum exhibits the history of Ahom, who ruled the Brahmaputra valley in Assam between the 13th and the 18th centuries. The museum, started in the year 1972, is now under the control of the state government. The museum holds ancient manuscripts, dresses and wooden, metal, cane and bamboo items. It also possesses some of the rare objects of the Ahom Kingdom.

Disangmukh is one of the popular tourism sites of this kind. Disang river has it's own importance sive the historical days. It was important medium of transportation in the Ahom days. This river was supposed to be one of the border of Ahom's capital 'Rangpur'. During the British rule, Disangmukh servered as a very important port for any transportation from Sibsagar to other place.
Disangmukh is a place for picnic. You could swim in the river, catch fish and have a relaxed time.

In Sibsagar you will be able to find lots of tea estates. Assam tea is considered as one of the best tea in India.
Tea fields will be full of tea plantation and in between there will be some different trees. The tea fields will be completely green in colour.
If you come to Sibsagar then don't forget to visit Tea estates. I guarantee  that you will really enjoy and have 100% satisfaction and peace of mind. And don't forget to drink or carry Sibsagar/ Assam Tea..

There are many other places in sibsagar. Some of them are KP Memorial Hall, Bor Xil, Dili Ghat,Boating in Joysagar Tank, Children Park, Bird Watch Tower & lastly you could visit the Oil fields of O.N.G.C(Oil & Natural Gas Corporation).